But here in Sucre, it has hit a new low. I ask if they have wi-fi and, of course, the answer is yes. My computer connects to the router. Full signal, five bars, yessir. But no internet access. Dead-end at the router.

Today, it seems a cable is broken somewhere. It’s only a matter of finding where.

Travelling with a dog

A lot of people ask if it’s any trouble to travel with a dog.

I’ll give you an example.

All overlanders (that’s how we call folks who travel long distance in/on a vehicle like I do) know it, Chilean custom officers take their job very seriuosly (that’s not exactly how we describe them but since there may be kids reading this, we’ll remain polite). NO fruits, no vegetables, no milk or by-products, no eggs, no meat of any kind, no animal by-products, no plants of any kind can cross into Chile from another country. Period.

On the other hand, you can bring in your pet, provided you have the necessary paperwork.

I waited 4 days in Sucre for the vet to re-open due to the holidays. When he finally did, I learned that, after he would have filled in the paperwork for Minnie, those papers would have to be approved by SENASAG (agriculture dept.) and that I would have no more than three days to leave Bolivia and enter Chile. Using the route I wanted, I was probaly 7 or 8 days from the border so that was out of the question. So I left and headed for the next city on my way (Potosi) where I found another vet the same afternoon. Same “SENASAG has to approve the paperwork” story here only it’s a bit more complicated because we need to use an official form from the collegio de veterinaria de Bolivia to submit the request.

Trouble is, there is no office of the collegio de veterinaria de Bolivia in this town. The closest one is in a town that is completely out of my way. The vet suggests asking SENASAG if they would accept a regular letter he would write himself certifying Minnie is in good health and has had all her shots. Of course, I’m willing to try. Otherwise, we would have to get the form shipped to us by bus overnight because the closest town where we can get it is 6 hours away by bus. The vet calls SENASAG again and again but the line is always busy. I will have to drive all the way across this mess of a city full of tight one way streets, just to ask them if, by any chance, they would accept a letter from the vet.

A heck of a challenge to find the place. It’s located in an alleyway. I alsmost drive in front of it without seeing it. I ask around and people tell me I’m not at all in the right area and that I should hire a cab and follow him so he would take me there. And then this girl comes along and tells me it’s right there, off of the next corner, in the alley and…there it is.

I must speak with the boss. I’m in luck, he’s still around and it’s 4:30pm. He says that yes, he could accept a letter from the vet but that IT WOULD HAVE TO HAPPEN TODAY because they close tonight at 7:30 for several days as all the staff is heading for the borders for surveillance due to the Dakar which is coming from Argentina.

Can you sense the emergency?

I re-cross that crazy town full of tight one way streets to go back to the vet so he can check Minnie and write his letter. When I get there, the place is closed…
He re-appears at 5:45 and passes me in priority as there is a looooong line of poeple waiting (he’s quite a good sports, in fact). Thermometer in the butt, light in the eyes and ears like for every other border crossing, Minnie is the healthiest dog on the planet.

At, 6:20, certificates and letter on hand, I leave the vet to cross, once again, this crazy town full of tight one way streets and go back to SENASAG. The boss greets me right away and gets busy scrutinizing the vets letter… as well as my passport. He then notices my passport says I got back in from Brazil while Minnies paperwork say she is coming from Péru as I had hidden her into Brazil.

A bit of a stressful moment..

“You are coming from Peru, aren’t you?”

After he prints a very official looking form, filled with all kinds of infos on me and Minnie, I leave the place, paperwork on hand, hoping Chilean customs would find them satisfactory.

It’s 7:30 pm, it’s totally dark, I have no idea where I’ll be sleeping tonight, I haven’t had lunch or dinner yet and I’m still is this crazy town full of tight one way streets…

So, if ever someone should ask you if it’s any trouble to travel with a dog, you’ll have an example to give him.

.
A few shots from the road between Sucre and Potosi: 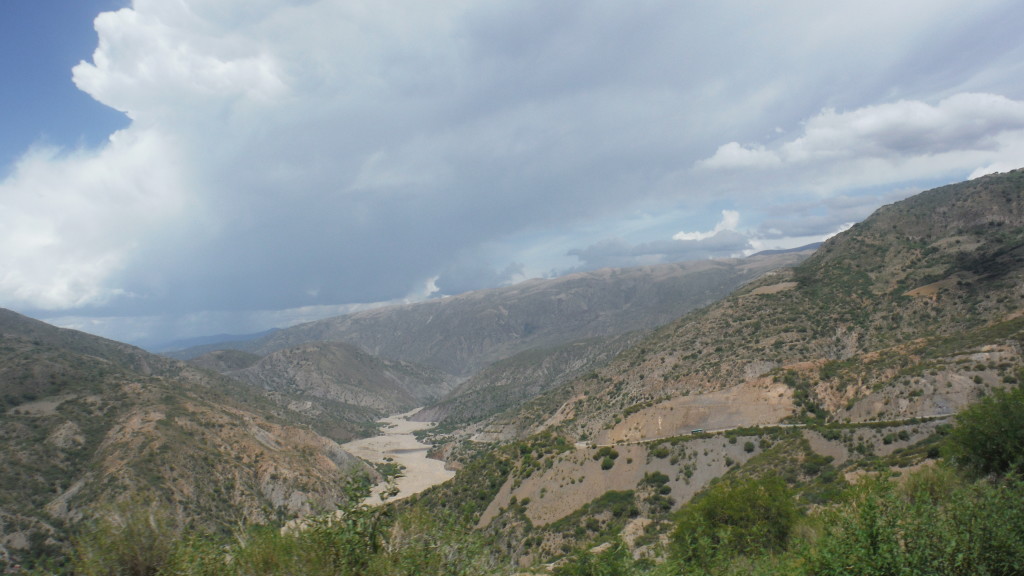 Nope, he didn’t move…I went around him. 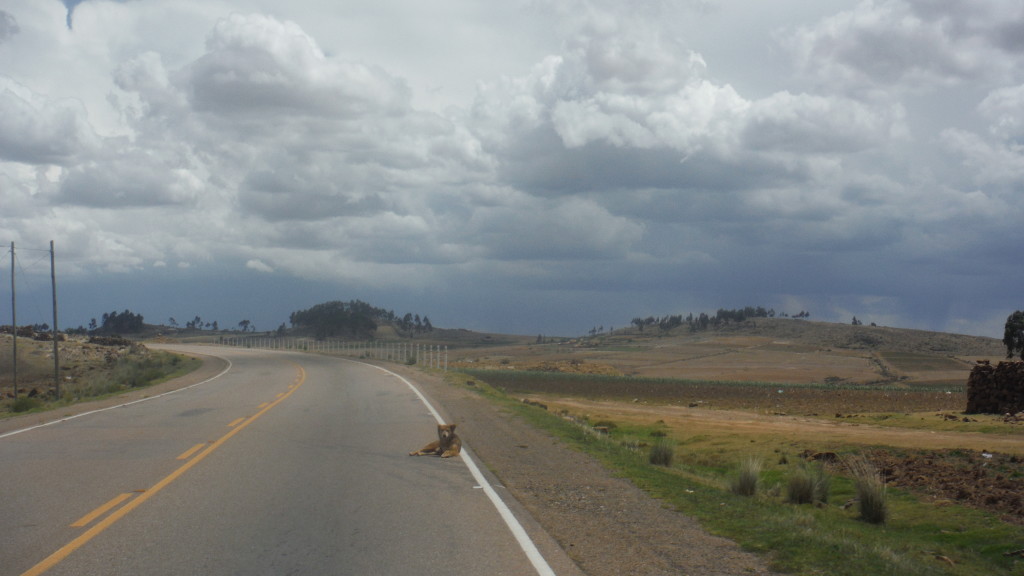 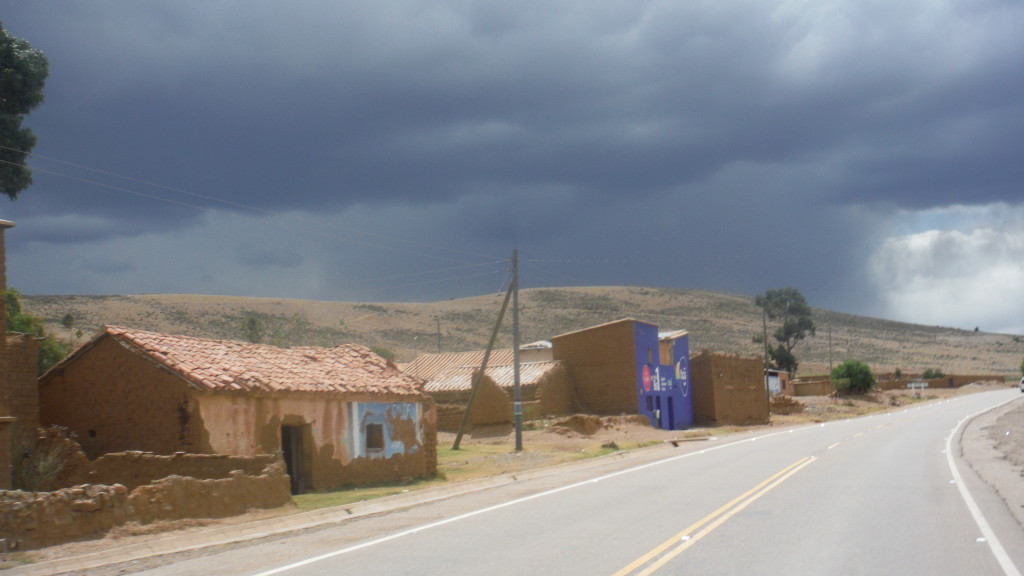 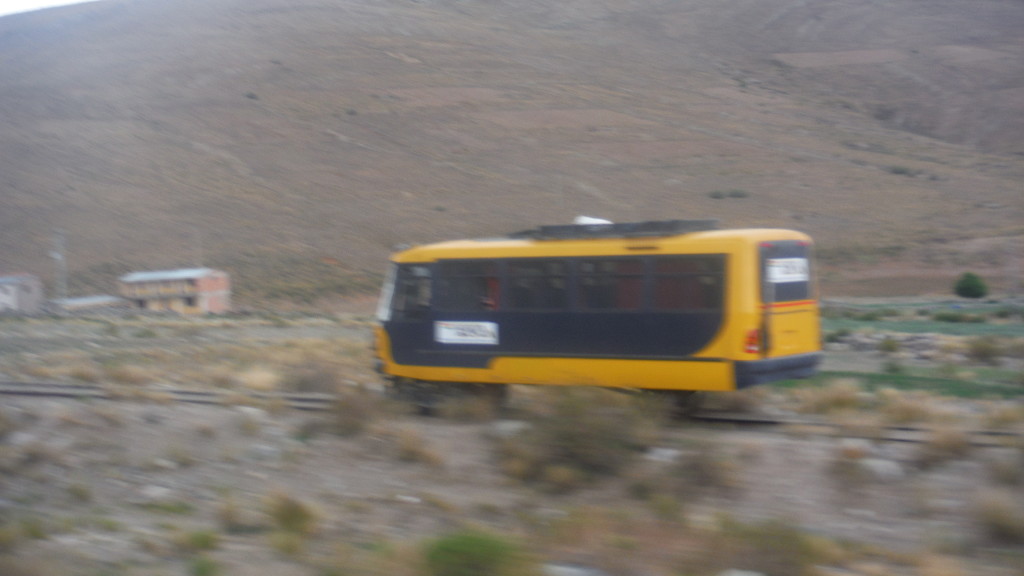 And the charming town of Potosi. Uglier than that, you die. 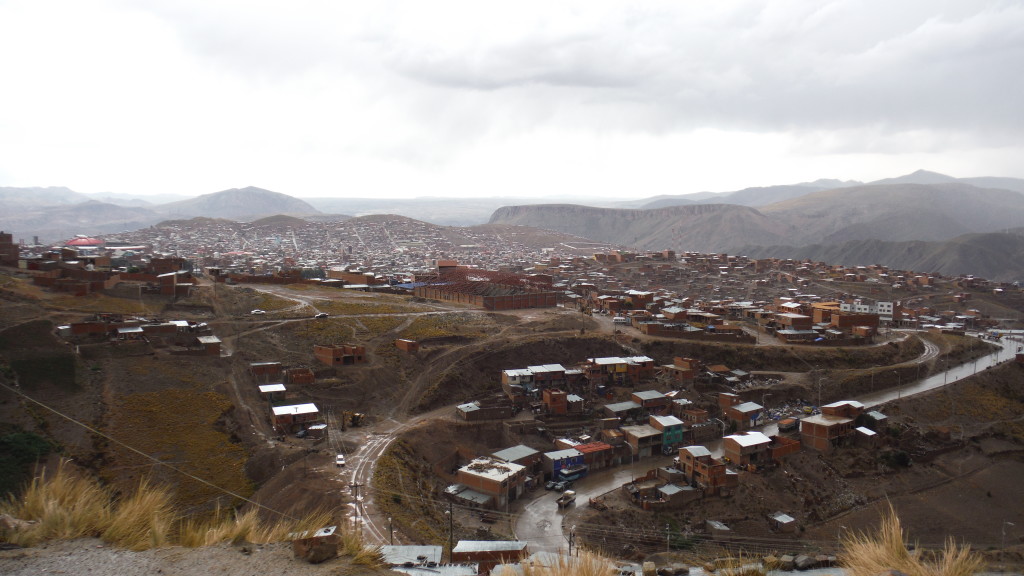 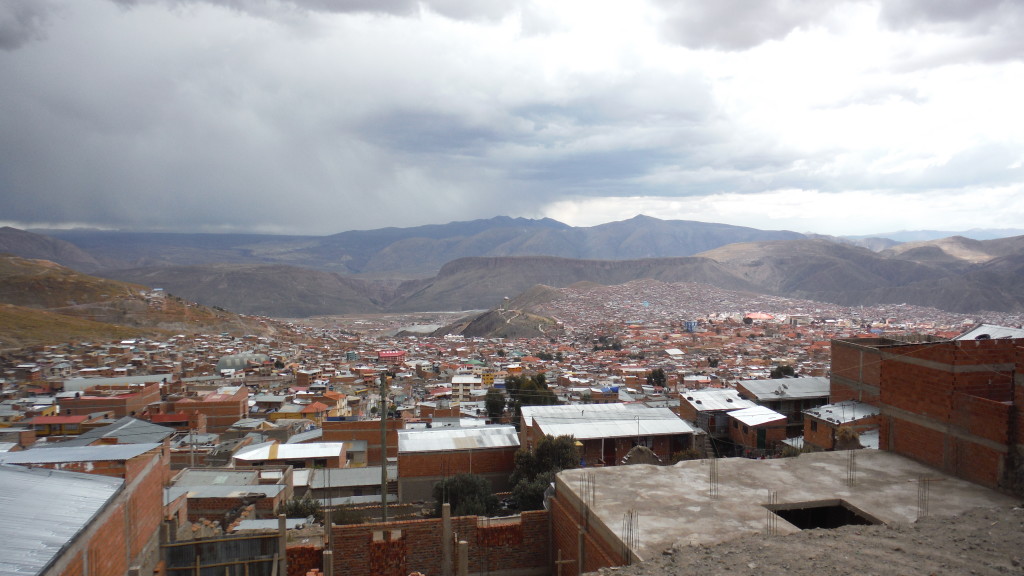 In Potosi, I take the opportunity to check out a working mine. Here, they dig for silver and zinc.
These guys from the processing plant collect the “finished product”. A thick mud, a paste of zinc and silver that will dry in the sun for a week.
Work shifts are 8 hours. Straight, no breaks, no lunch. Shovelling mud. 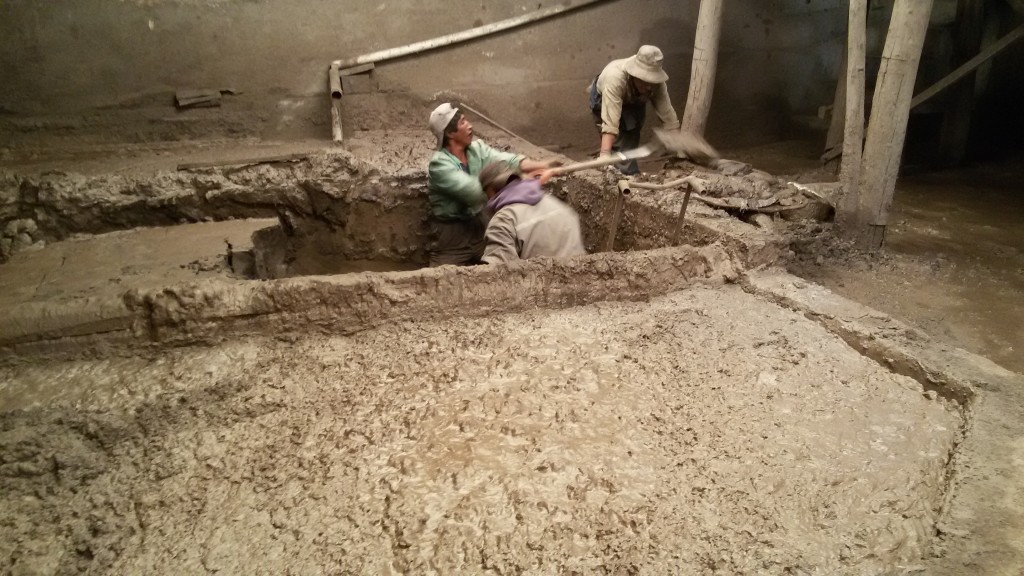 Here’s me well equipped and posing in front of the Cerro Rico where 45 mines litteraly undermine the mountain. A real piece of swiss cheese. Someday, everybody knows it, it will all collapse. 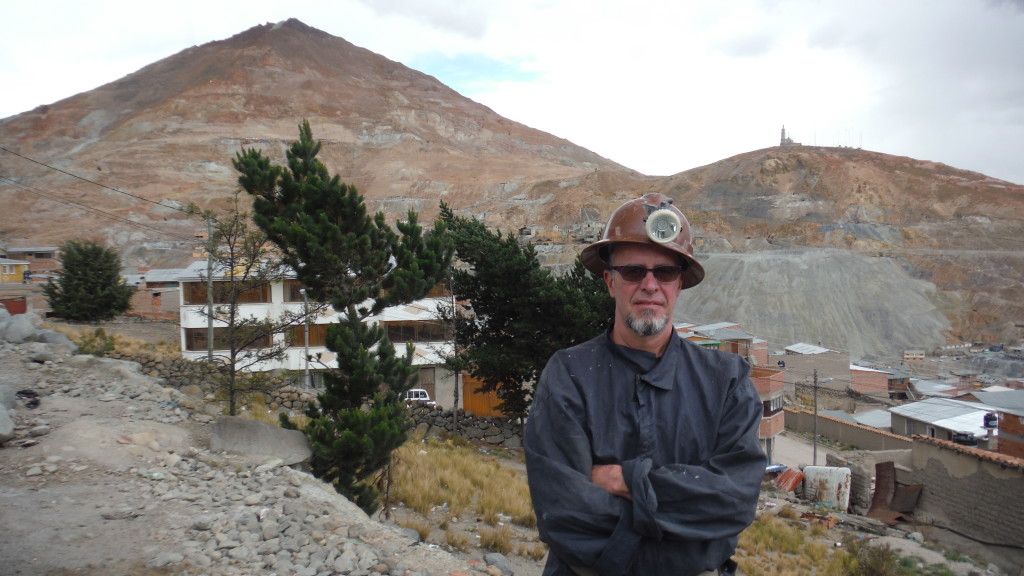 And here’s our guide, with a REAL stick of dynamite in his mouth. Craziness doen’t always lead to murder… 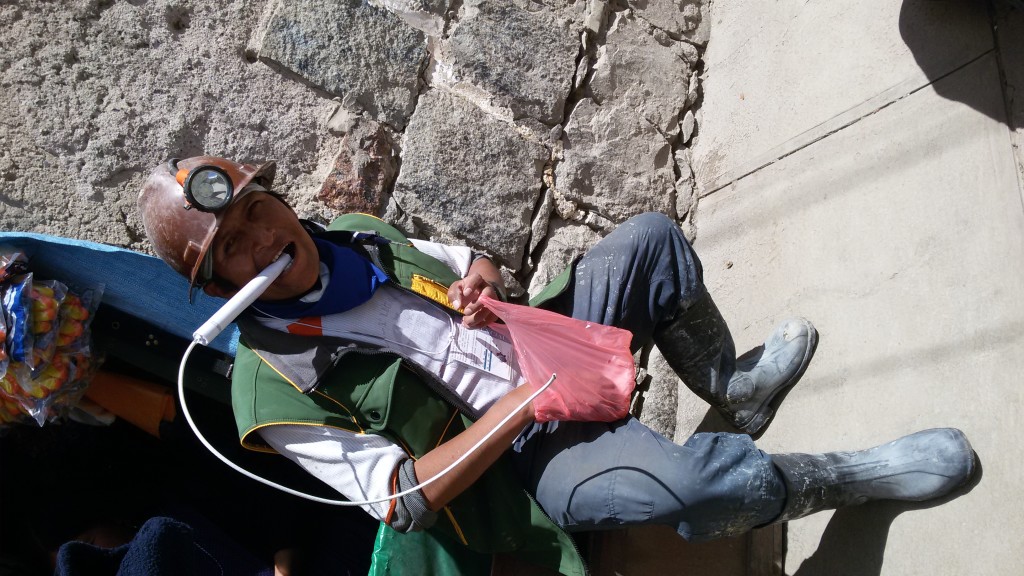 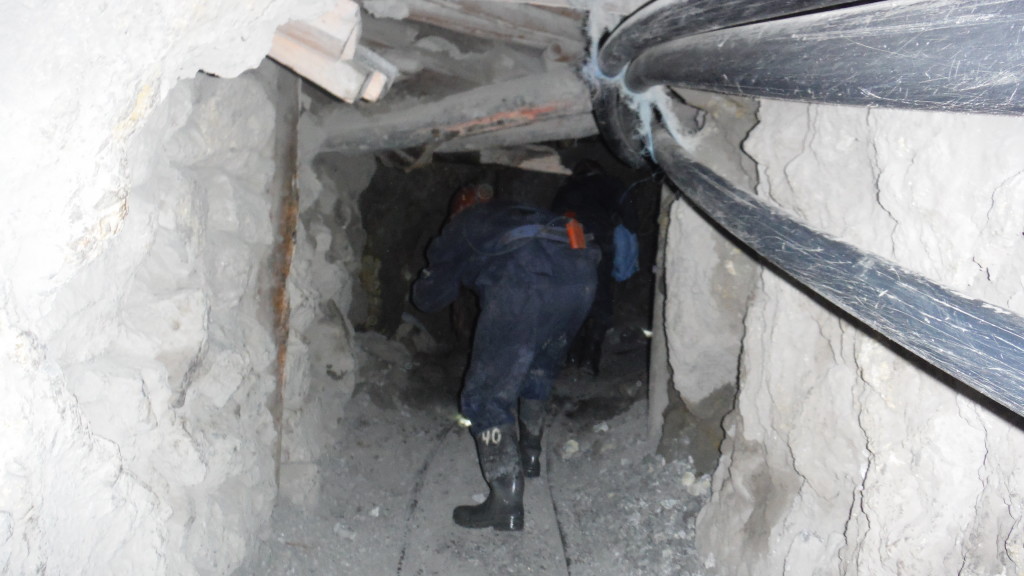 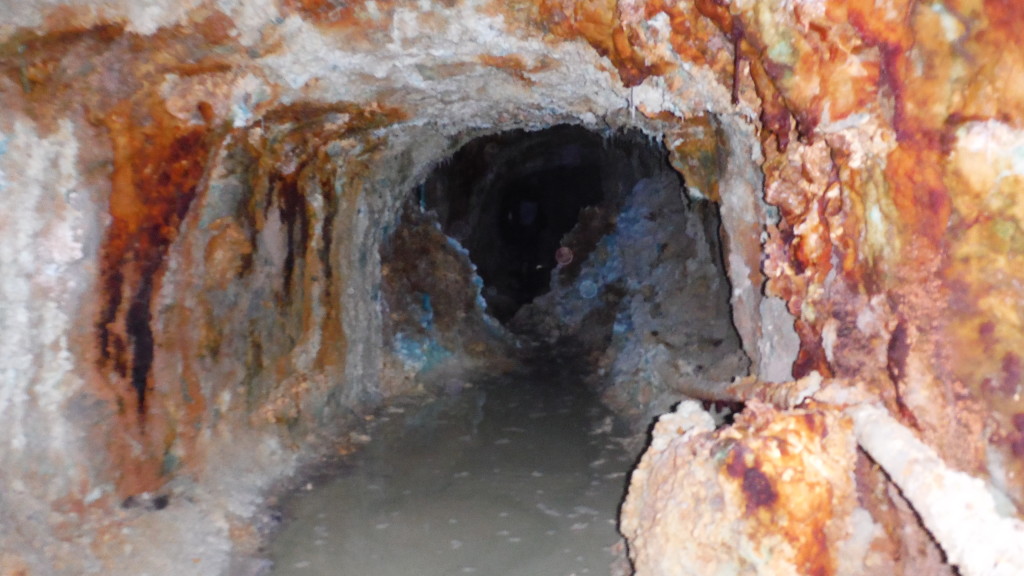 And here’s Tio. according to the legend, Tio owns the minerals of the mine. It’s best to have him on your side. That’s why minors offer him coca leaves, cigarettes and other presents and sit down with him to praise him. We ask his favors and toast with our guide with 96% pure alcohol.
Well equipped, the Tio. 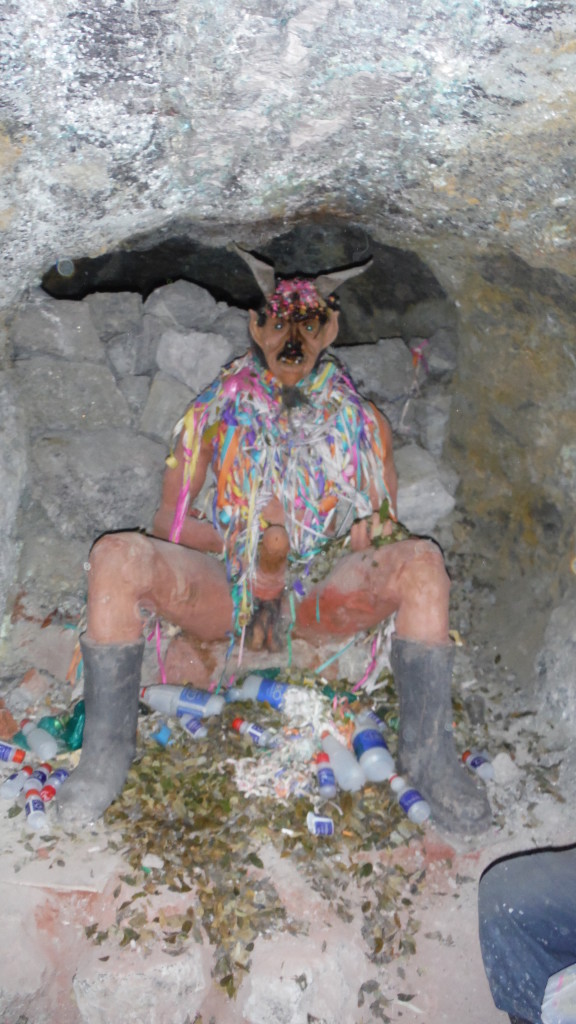 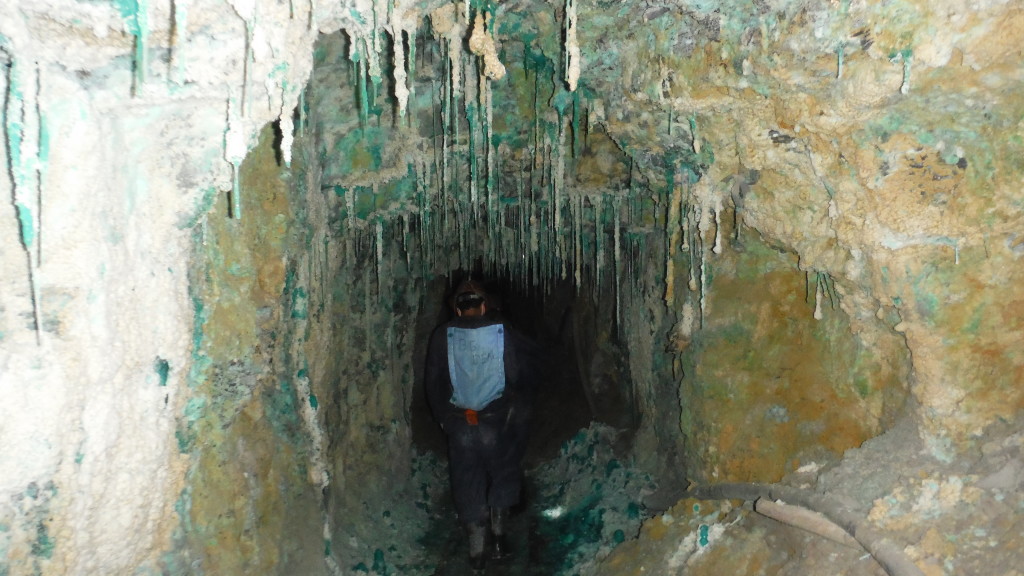 May I introduce you to Ricky Martin (his real name, apparently) 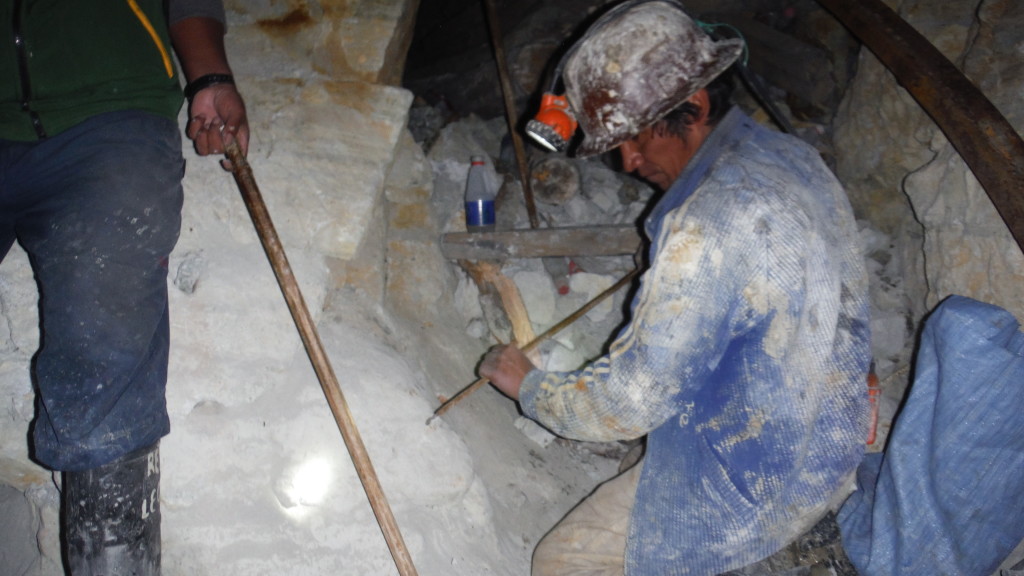 Digger by trade., he is now digging a hole where to insert the dynamite stick I give him as a present. Here, work shifts are 24 hours. To help cope, the guys fill their cheeks with coca leaves and chew on them as they dilute the juice with… 96% pure alcohol. Effects of the coca leaves fade after about 4 hours. That’s how they know that 4 hours have gone by and there are only 20 more to go… But today, Ricky spoils himself and leaves his work behind to go grab a bite to eat…and to refill his cheeks of new coca leaves. Kind dude this Ricky, he offers us a sip of his 96% pure alcohol (the color of which is of a greenish shade and at the bottom of which we can easily see bits and pieces of chewed coca leaves coming from you know where…).

But the female visitor beside me accepts the juice with pleasure.

After a visit of the mine (which did not collapse today), I go back to my camp spot in a volcano crater (which did  not erupt today), right by a small lake fed by hot springs.

30*C, nice temperature for a bath. 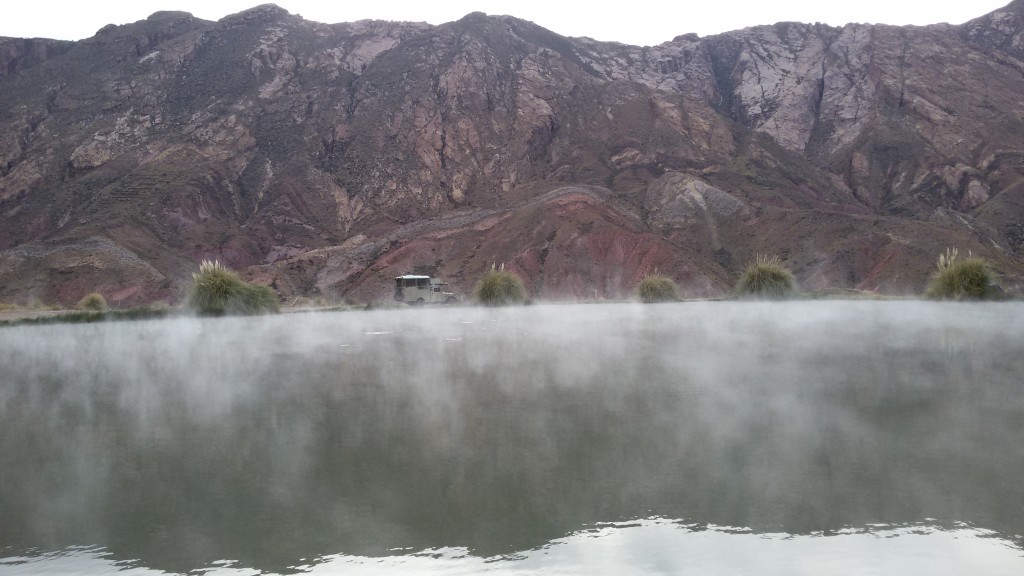 In the next installment, Uyuni and the Dakar.