No4 gets a heart transplant. (Part 1)

The news weren’t good. No4 had a clinically dead cylinder. After we got back from Arizona and before we left to explore the Green Mountains of Vermont, I had taken No4 to the diesel doctor to get its pressure checked. And the news weren’t good. One of the cylinders on the old 2H was running 100# less compression than the others. Basically, No4 was running on 5½ cylinders…

That would explain the dense light blue smoke and the very rough idle on cold starts. Surprisignly, the engine would perform quite nicely once warmed up: Zero smoke even under load, decent fuel milage (21mpg) and half decent power (out of a 2H that IS surprising even with a turbo).

Once warm, the engine felt normal enough that we took No4 out in the desert of Arizona and over 1st gear hill climbs in Vermont! But were we going to take the risk of driving it down to Central/South America knowing all too well something is definitely not right under the hood? Would you? I didn’t think so…

At first, just thinking of having to rebuild/replace the engine seemed like such a major major project that we kept putting it off, foolishly hoping it would go away by itself, I guess… But we had to do something… I had asked my mechanic (funny how I now have MY mechanic..) to give me an estimate of the cost of rebuilding the motor. Well, considering about 40 hours of labour @ $65/hr (which is cheap around here) plus at least $1,500 worth of parts plus taxes, he came up with a total of about $5,000. That, of course didn’t include the many surprises one is bound to stumble onto when undertaking such a task as engine rebuilding. We had to do something, but what? Abort the whole project? Leave the engine alone and try our luck?

Even when they were still in fashion, 2H engines were rare up here. Thirty years later, trying to find a good used replacement for No4 would be like going through a whole barn full of hay stacks, looking for that needle…

But luck strickes those who dare and I soon found an ad for a hangar full of Land Cruiser parts including a running truck, a parts truck and a third one that had been completely taken apart. Each one of those trucks had the exact engine I was looking for! The cherry on the sunday being that one engine had been taken apart, completelu overhauled and was just waiting for someone to put it back together.

Only one major problem remained: Where the hell was I going to find someone to help me put this thing back together? I mean, I can change the oil, the brakes or a shock absorber but to rebuild an engine, forget it!

I made an offer to the seller which he promptly accepted. I will buy everything provided you help me rebuild the engine (he is a mechanic).

Fast forward a few months and here we are, about ready to begin reassembling that engine. I keep my fingers crossed that Gilles (the seller) will show up as promised…

Unloading and installing the block on its stand with my friend Luc. Isn’t it nice to have good friends? 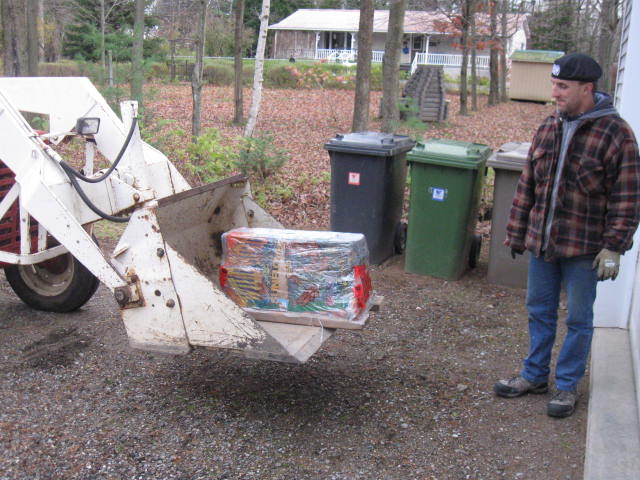 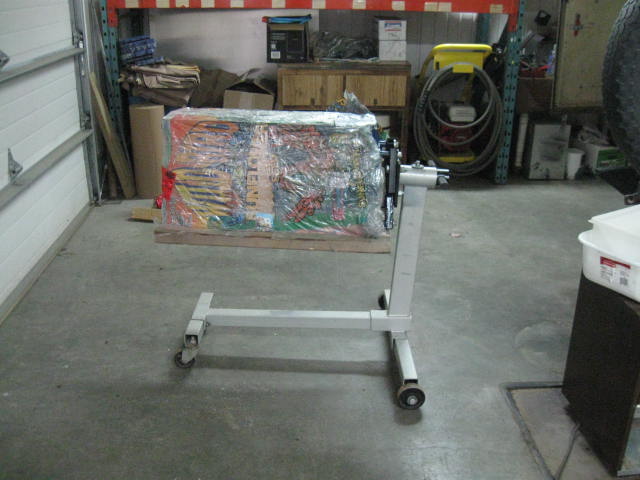 Just a few of the many parts we’ll use. Boxes and boxes full of parts. 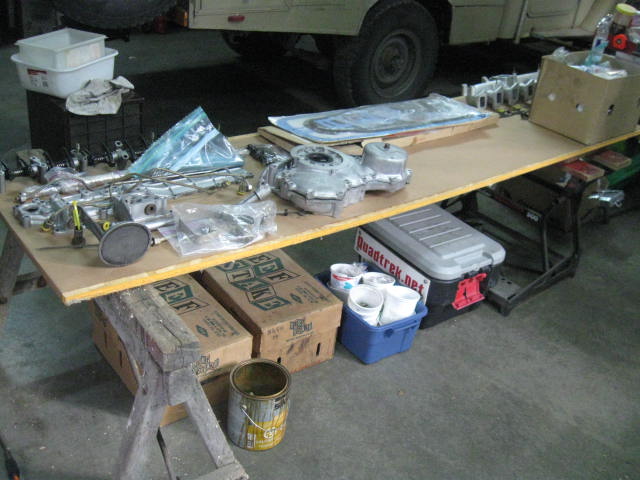 Gilles shows up right on time and he’s all cranked up and ready to operate his magic on No4s new heart.
(Maybe not the best of pics, I’ll admit) 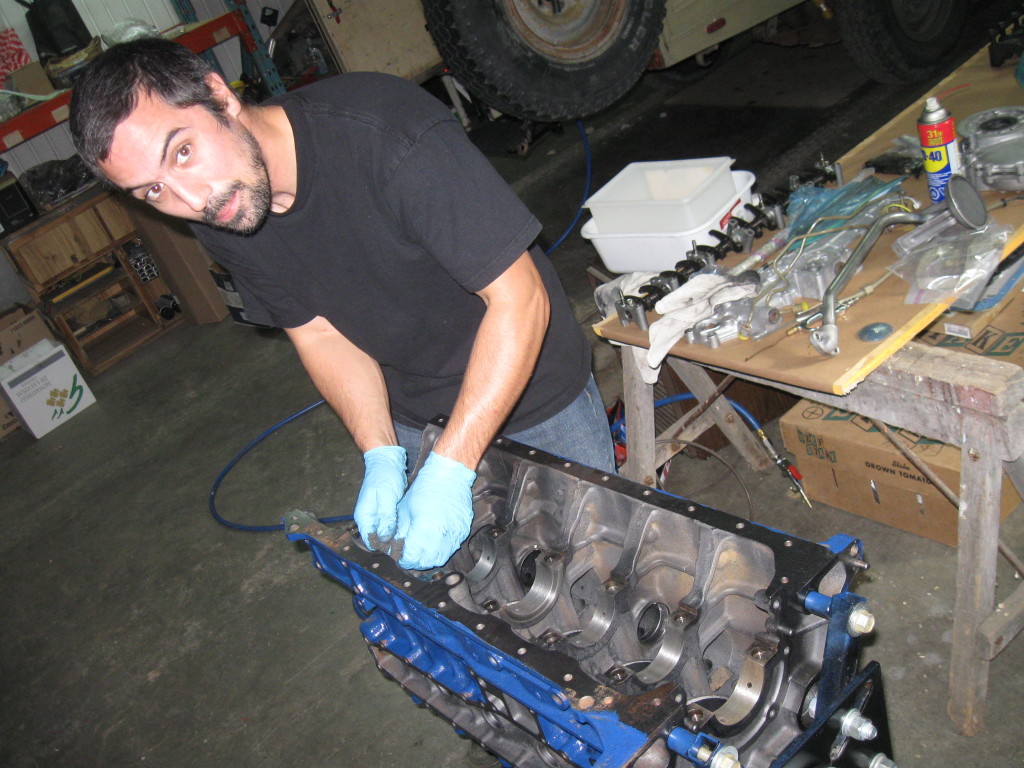 And so we begin checking, measuring, assembling, slowly turning a pile of metallic parts into an actual engine. 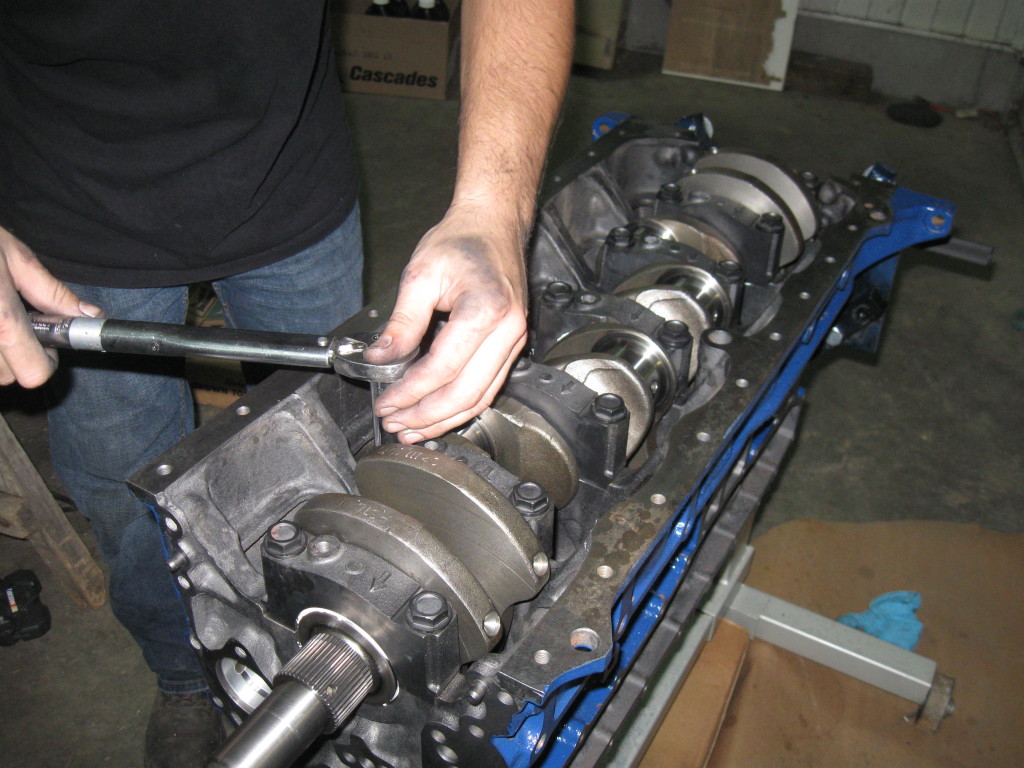 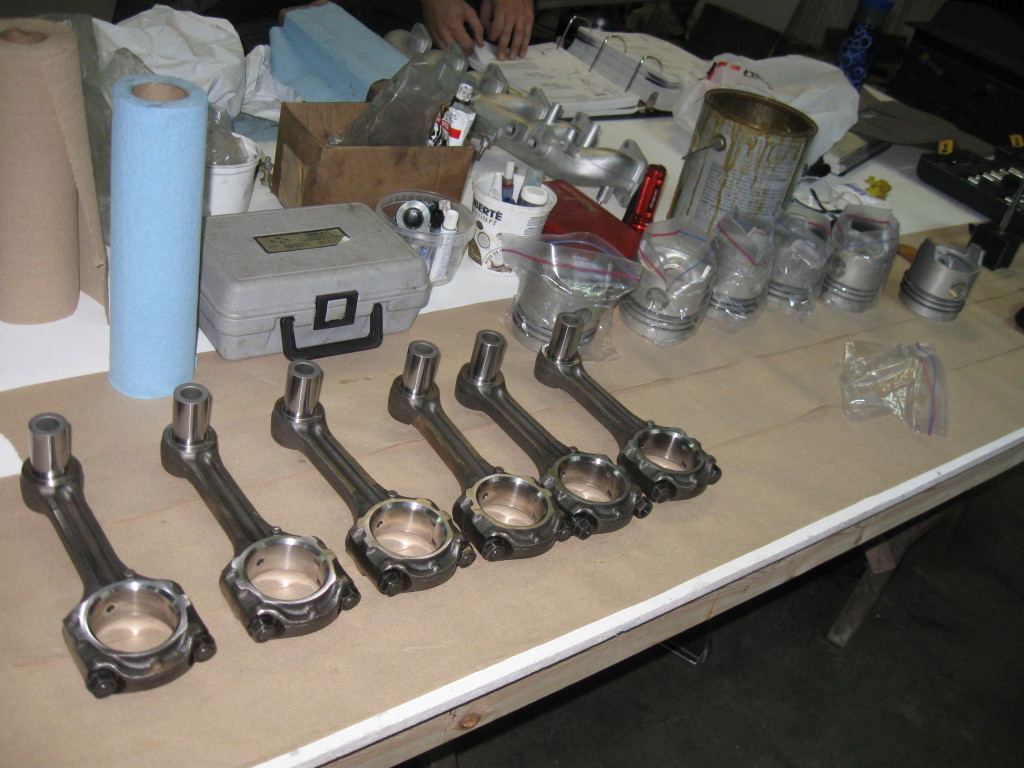 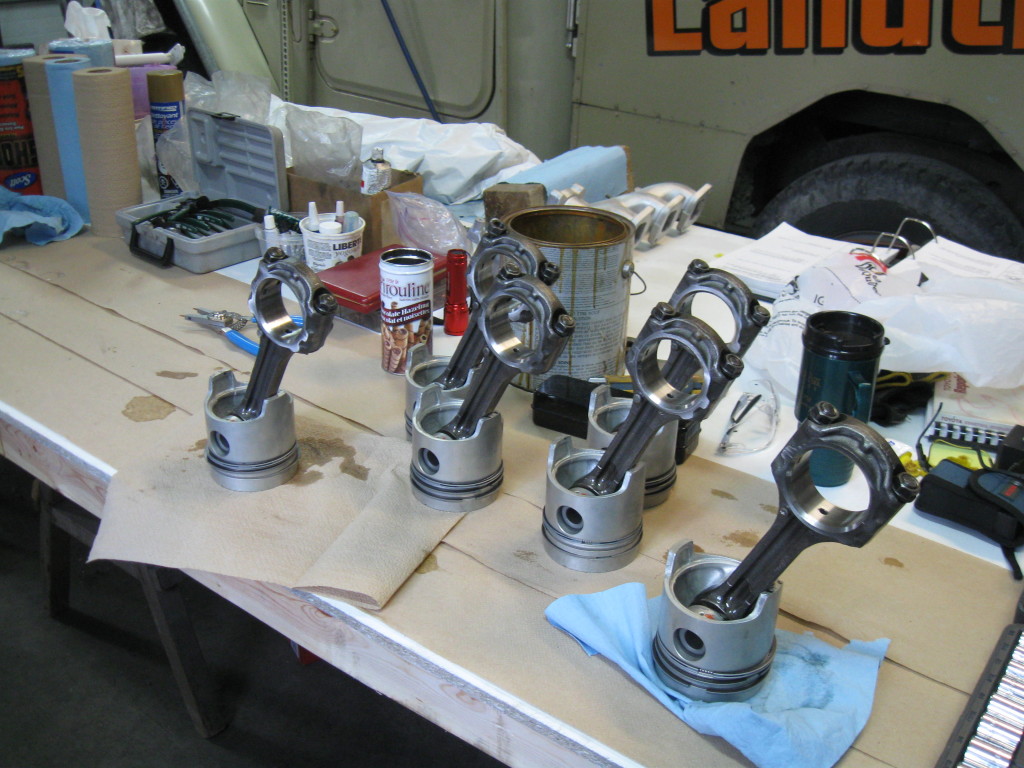 New rod bearings ready to go in: Check. Well, not quite. It seems the bearings included in the rebuild kit weren’t the correct size. We scramble around trying to find right sized bearings but they are nowhere to be found neither in Montreal nor in Québec. Not finding these things would mean having to resolve to paying to get a perfectly good crank shaft milled down to match the ones we have… And, for some reason, that doesn’t sound too appealing to me… Bummer…