At the Chilean customs, I get a new garbage bag out…

Basically, it’s pretty easy to figure it out. All that is vegetal or derived from vegetal as well as all that is meat or meat product goes to the garbage

Just when the guy from agricultural dept. walks up to me, I’m ready.

“And you have the requiered paperwork?”

He takes my papers and goes back to his office. Meanwhile, I get my passport stamped. A simple formality. Bing-bang and it’s done. On the other hand, I have to fill out a form that specifies I AM NOT importing ANY vegetal or animal products. Said form I need to sign and that also talks about fines of up to $300 US PER NON-DECLARED ITEM…

Euhhh, peanuts are vegetal, aren’t they?… Does that count? And, clearly there must be at least some meat in Minnies dog food… Hummm…

I check “Yes” at the “Are you importing any regulated items?”.. We’ll see what happens…

(The nice part of travelling alone is that I don’t risk putting somebody else in deep sh.. by doing stupid things…)

I go back to the truck and wait. And wait. And wait. 30 minutes, 45 minutes… During that time, another custom officerslike couple come around and ask for No4 parpers. Seems they want to prepare my temporary import permit.

Pretty effective, those Chilean officials. First time anybody ever ran after me to do my paperwork! Shortly thereafter, bing-bang, permit is stamped. Good for 90 days.

But I’m still waiting for the agriculture guy… And what’s suppose to happen if they refuse Minnie entry? We undo all other paperwork and I go back to Bolivia?

Running out of patience, I walk into his office, just as he finishes filling up more forms.

We walk back to the truck so he can make sure I am not importing toxic and dagerous goods like… oranges or whatever. But, his wife meets us (him) halfway to the truck with his two kids and his two dogs.

Finally, he’s here. He opens the fridge door and, finding nothing more in there than beer, wine, dog hair and the smell of oinions, he closes it right back up. 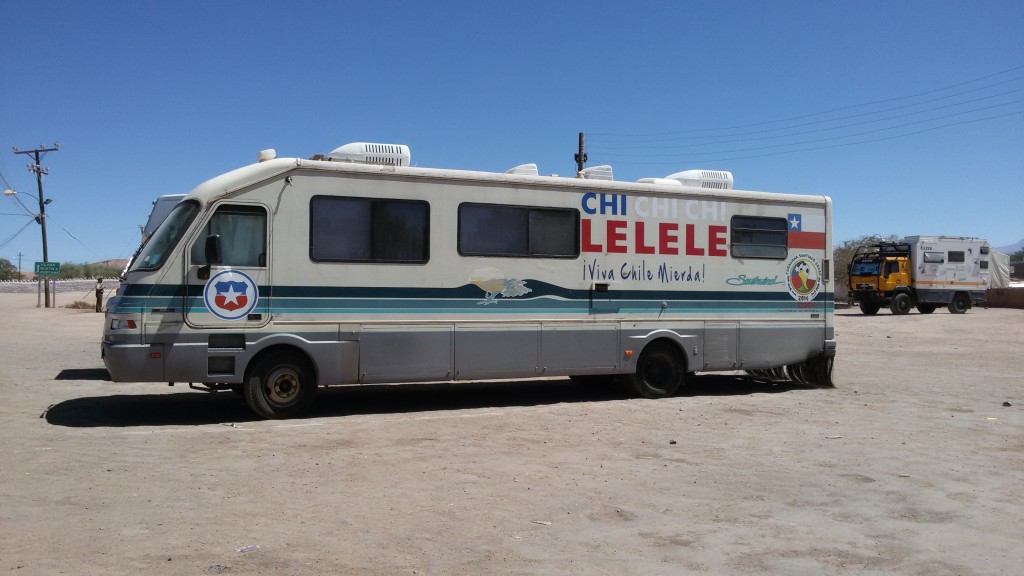 Minnie says: “Got me a bit worried there. I need a refreshment!” 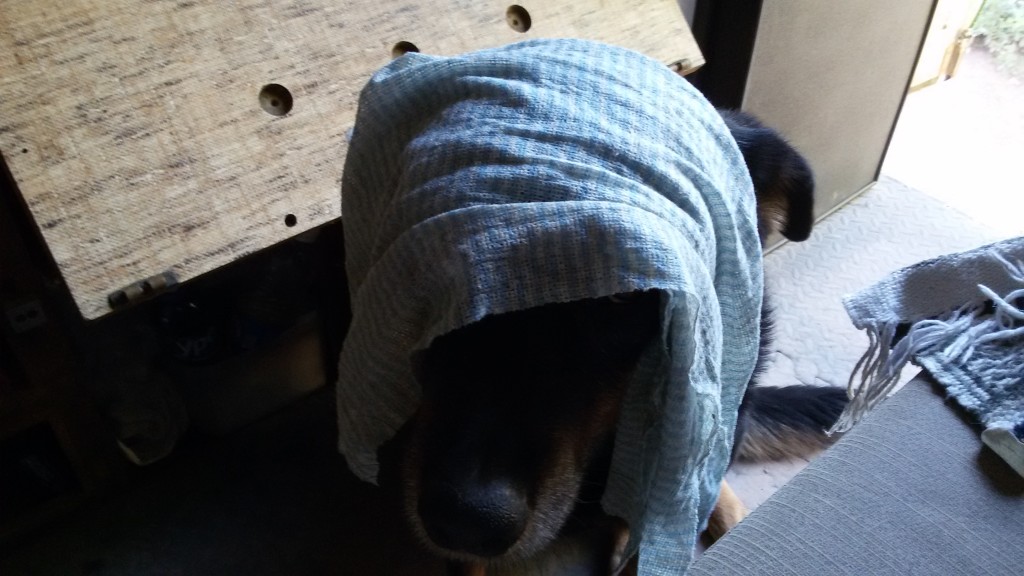 First stop; the welding shop… But hey, NO, nothing actually broke on the roof rack in all of those 400 – 500 kms of trail ! Incredible! But true.

A smal, ultra-touristy town from which most sight seeing tours get started. And there is a lot to see around here. Unfortunately most of the stuff kind of repeats what I’ve already seen in Bolivia. Geysers, volcanoes, multi-colored lakes and such… You know, the routine stuff… So I will be happy just to check out Valle de la Luna which, apparently, is very different from the rest.

Nevertheless, I do like this town very much. After all the recent events, the holidays, the rather exhausting run thru South Lipez, I think I may be taking a break here for a little while. Plus, I love the weather here. Hot and dry in the daytime and nice and cool at night. Wonderful, If only that afternoon wind could die down a bit… 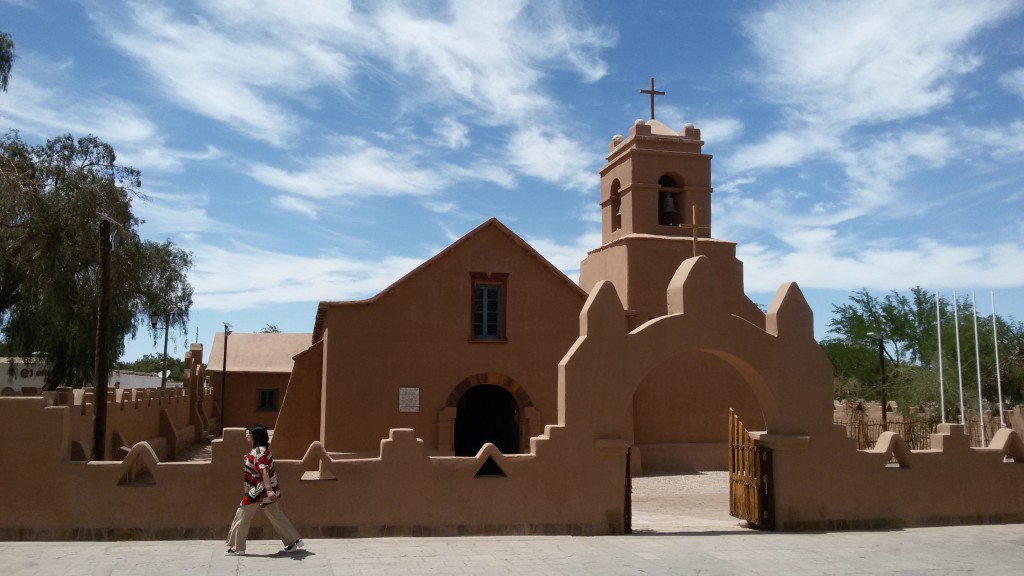 San Pedro, where folks water their dirt in hopes it grows… 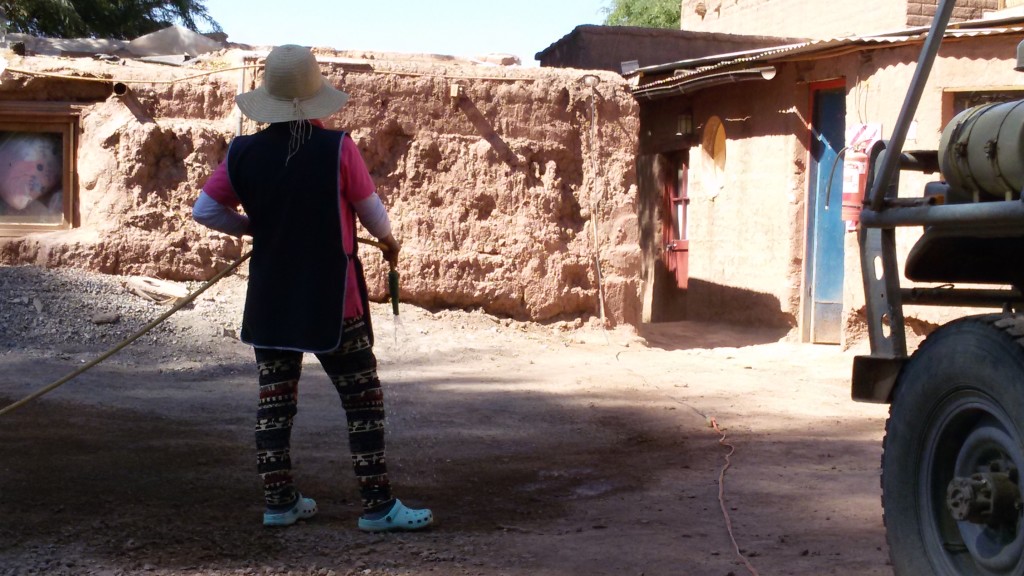 After a few days relaxing, I decide to check out the “lagunas altiplanicos”. I ask around and told they are about 120 kms south-east of S.P.

There’s only one gas station in San Pedro and the line is 15 cars long. No worries, I still have a quarter tank full and a 35L reserve I’m carrying around since Ecuador and that I’d like to use at some point. Plus, I just don’t feel like waiting, so, I’m on my way.

There is no gas station on this road, the nearest being in… San Pedro. But, based on experience acquired in the 13 previous countries, there’s no way NOBODY is selling fuel on this road. It’s simply IMPOSSIBLE.

In Socaire: Bingo! My first fill up in Chile and it’s totally illegal ! Cool. 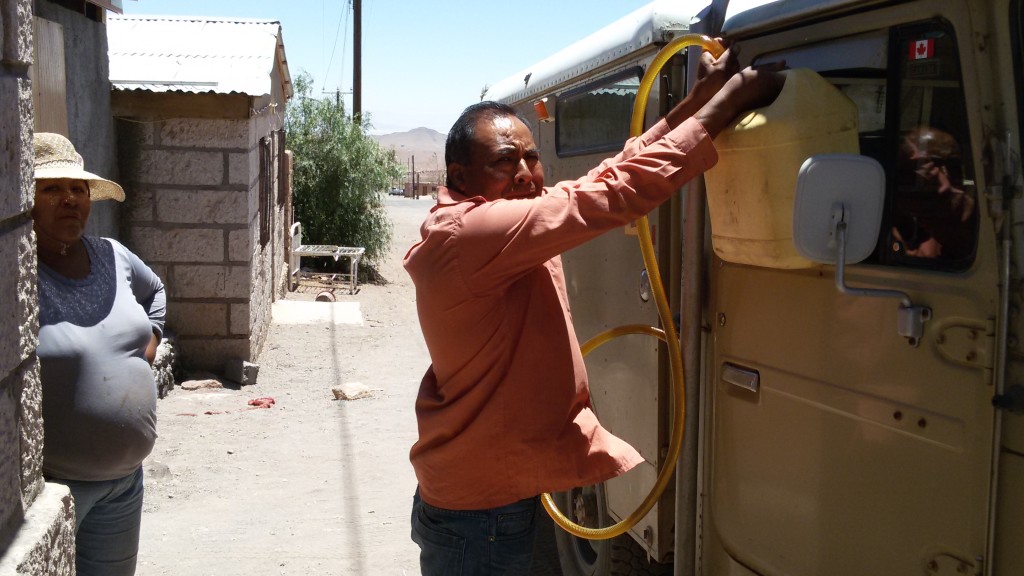 Of course, he sells it double the regular price but hey. I was once told that, if you have time, you can save lots of money. But if you don’t have or won’t take the time, then you’ll eventually reach the same goal but it will cost you more. I pay for not having had the patience to wait in line… 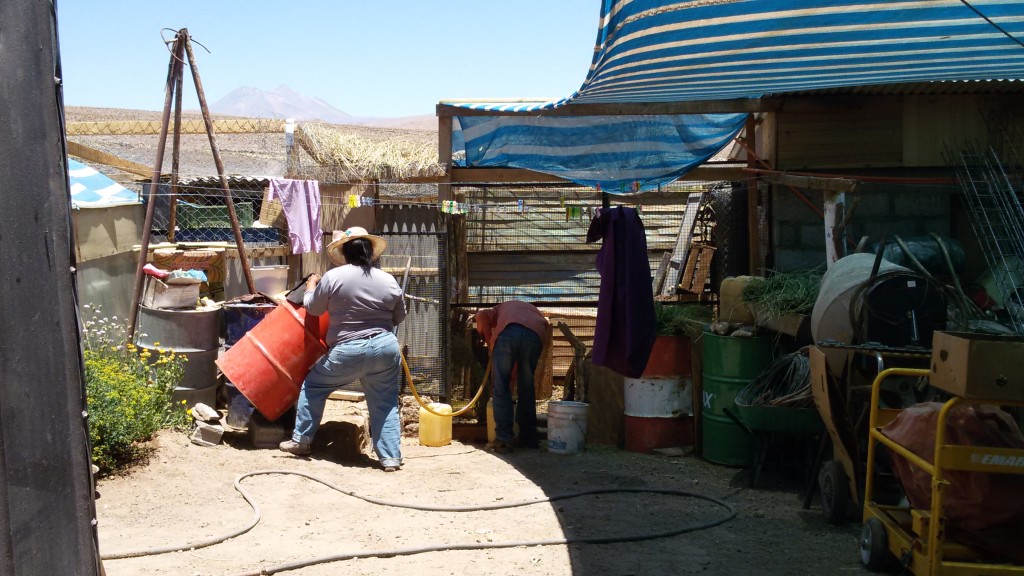 Kinda nice on the way to the lagunas. 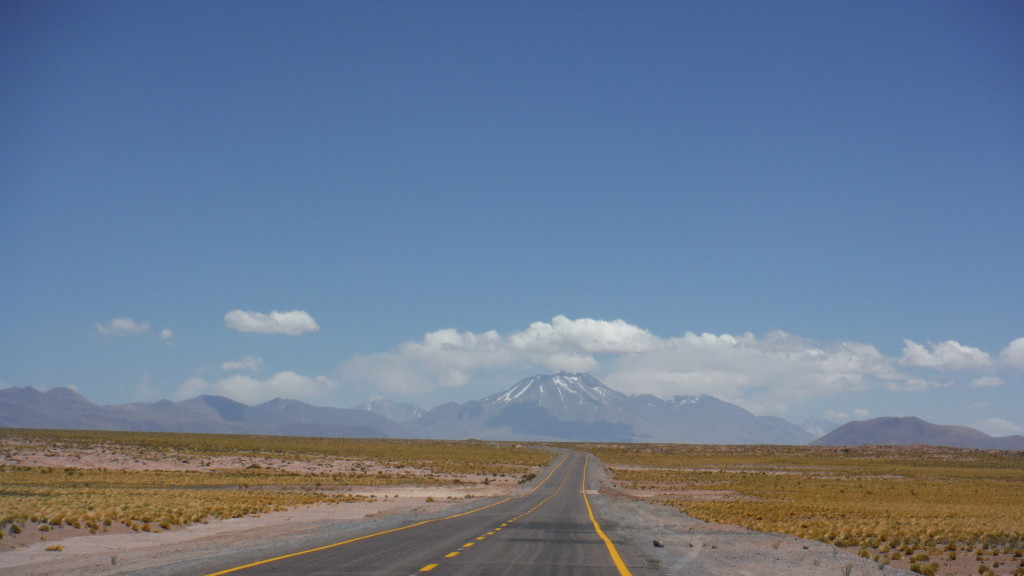 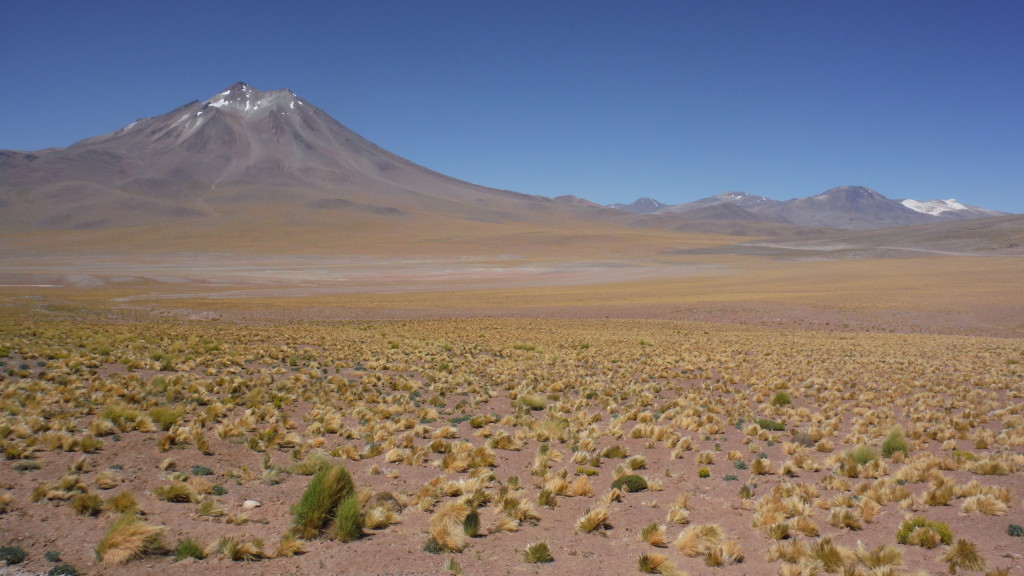 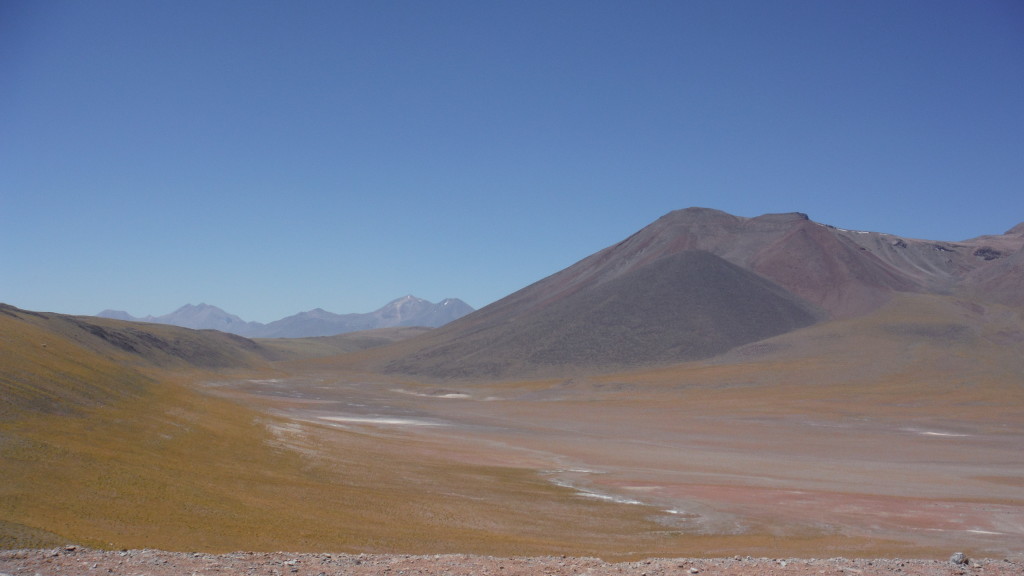 But the lagunas themselves are a bit disapointing. OK, I guess but not enough to justify the 400 kms round trip.

View from my camp spot near an oasis on the way back to San Pedro. 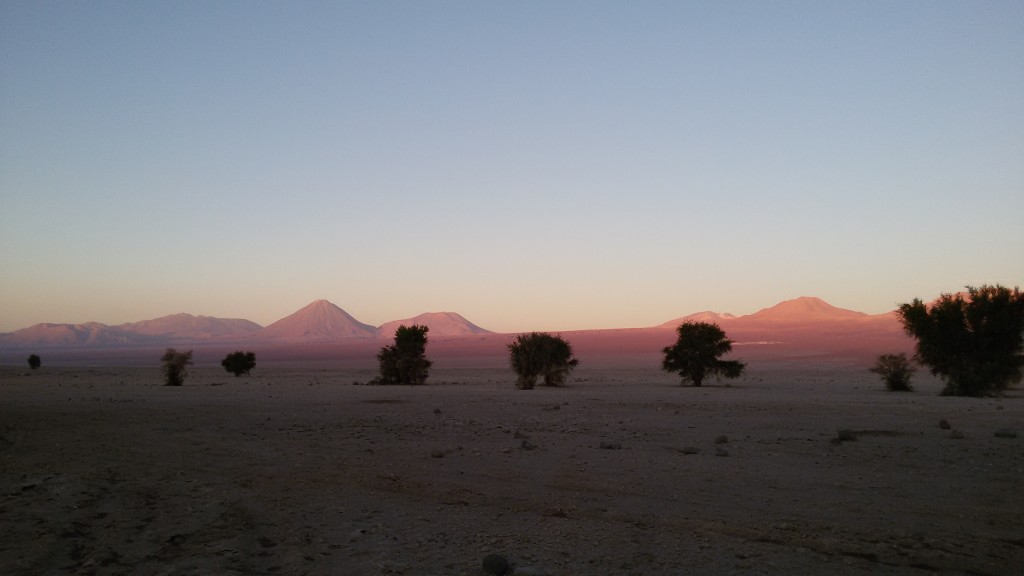 Valle de la Luna, on the other hand is worth every penny. Plus, it’s only a few kilometers out of town. I will let the photos speak for themselves. 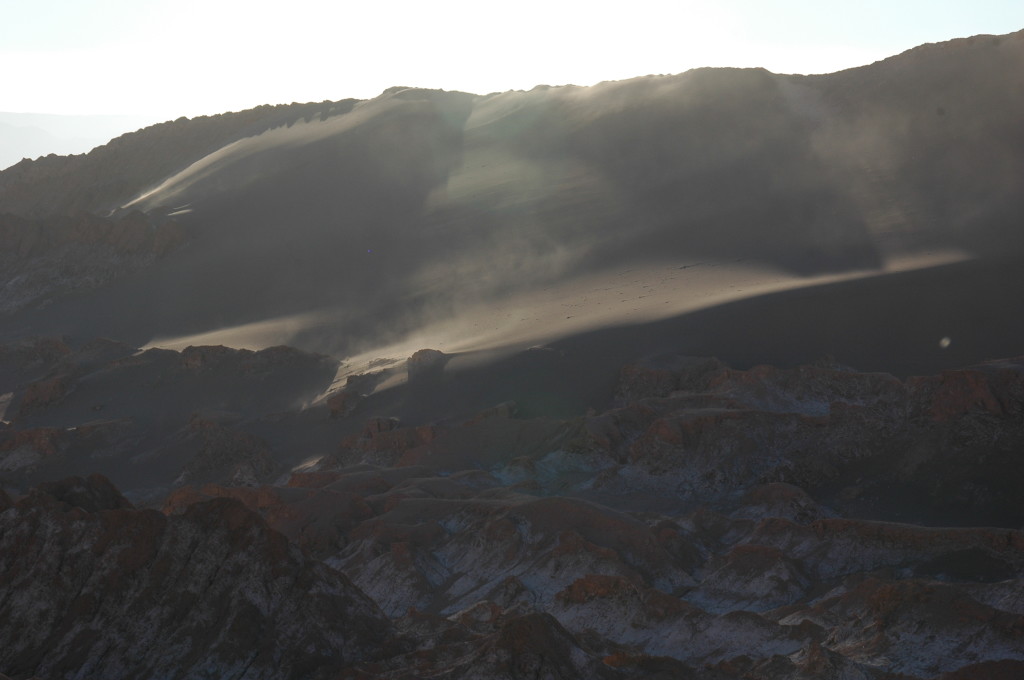 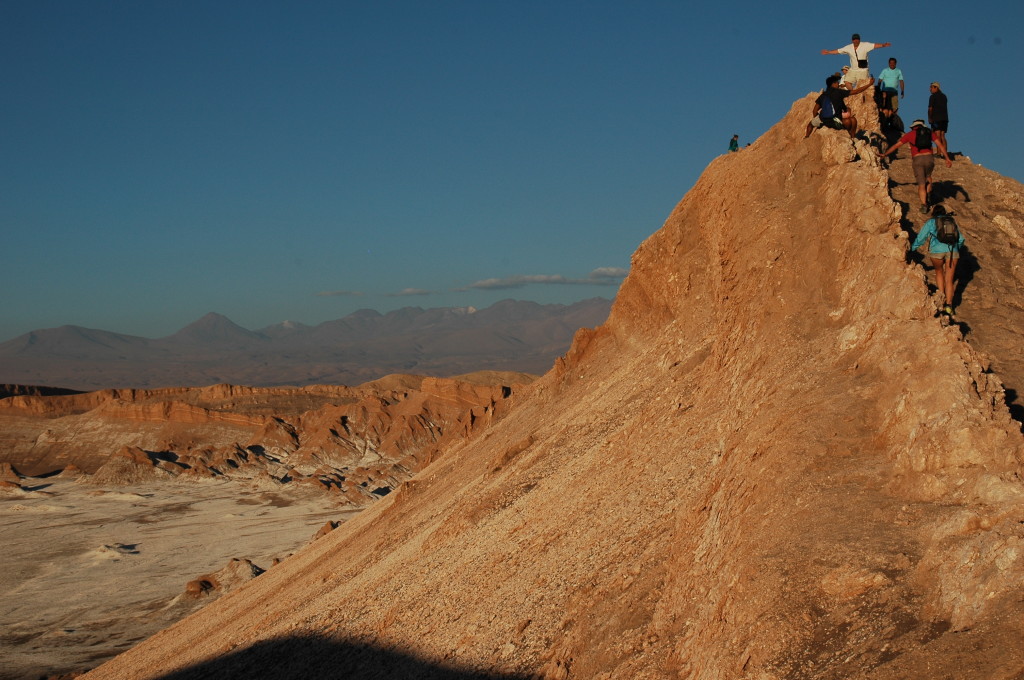 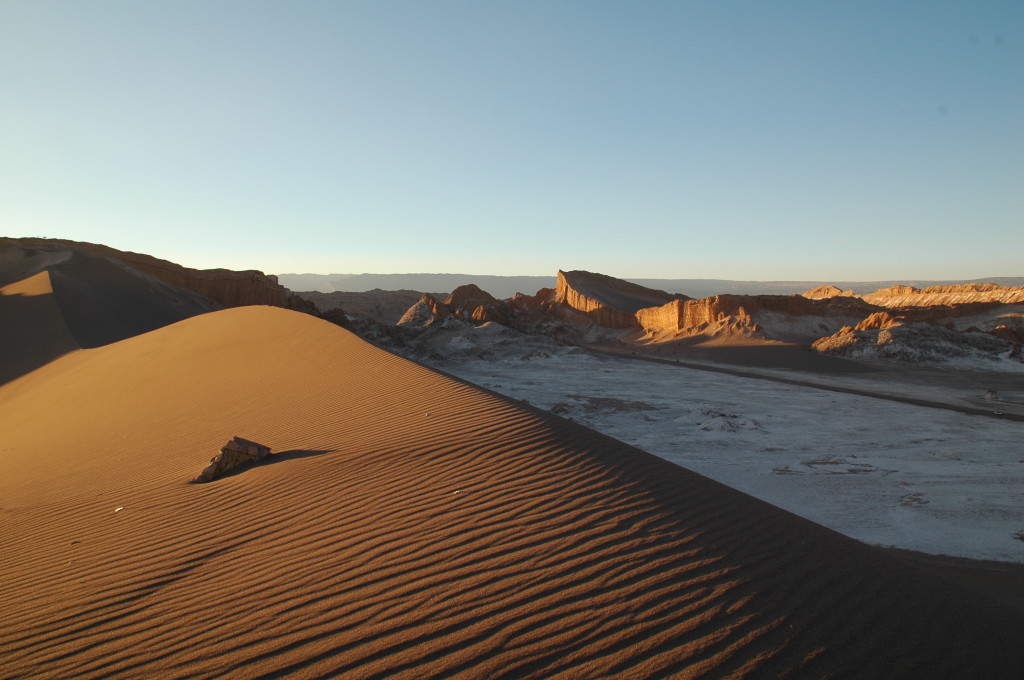 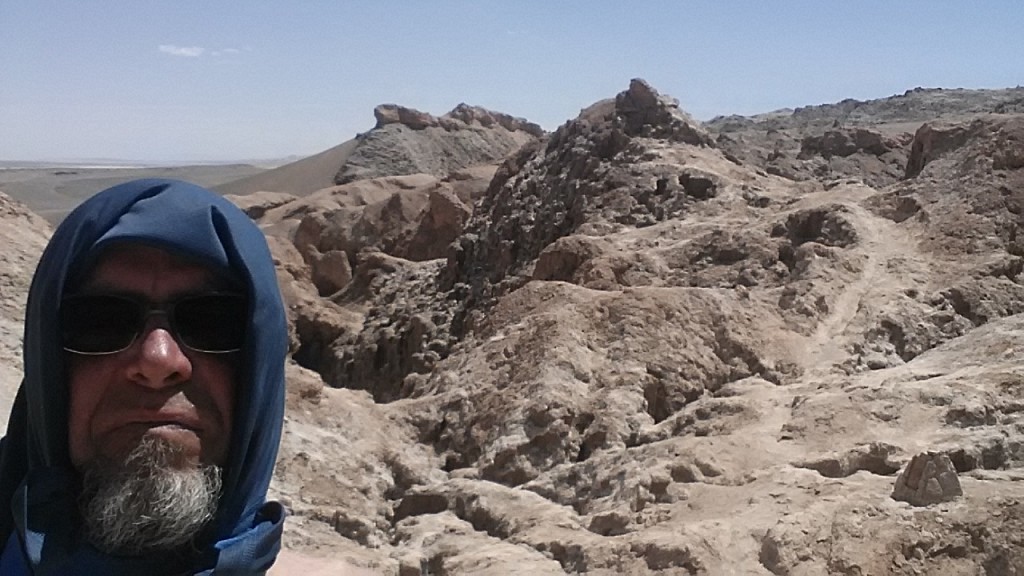 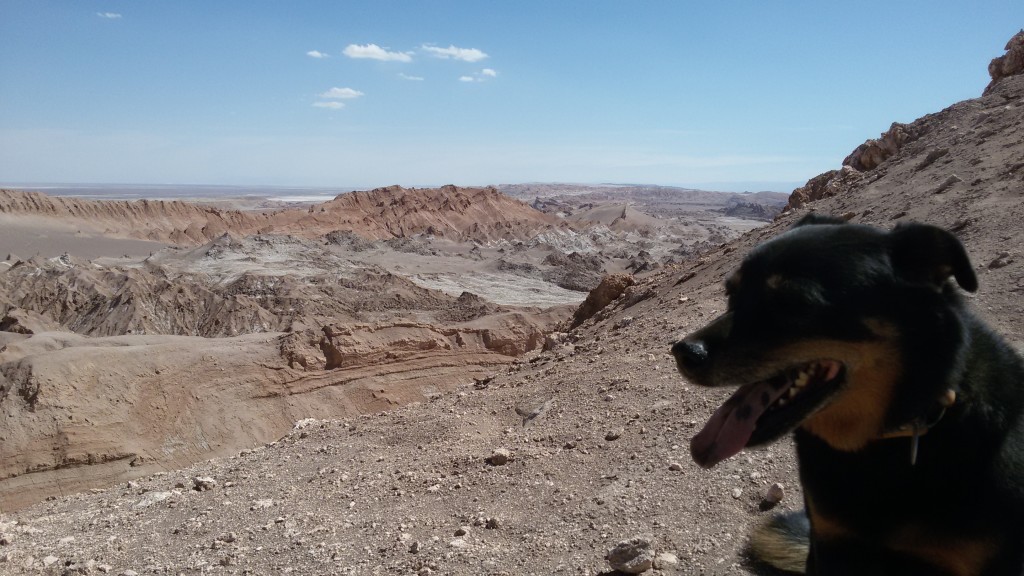 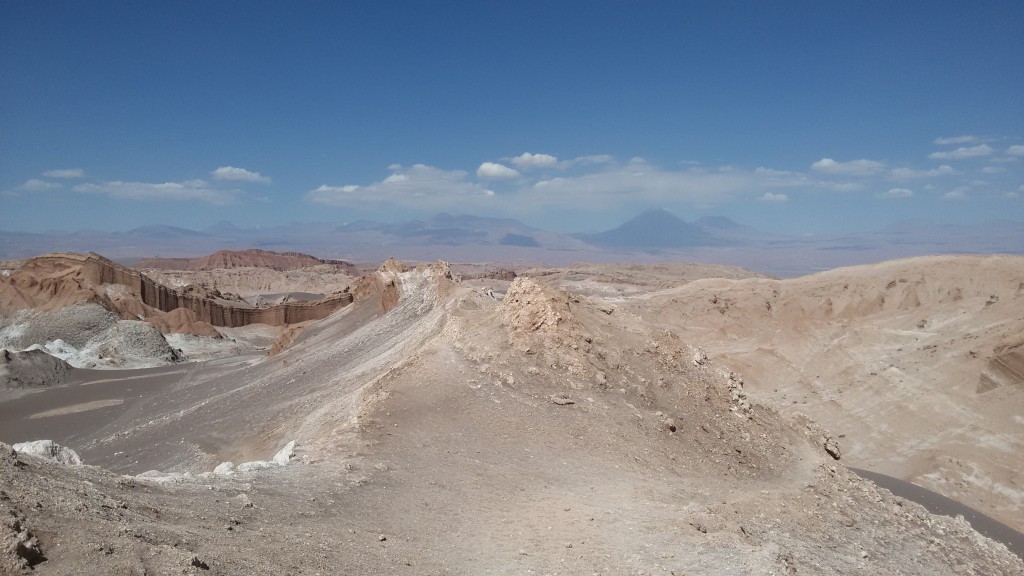 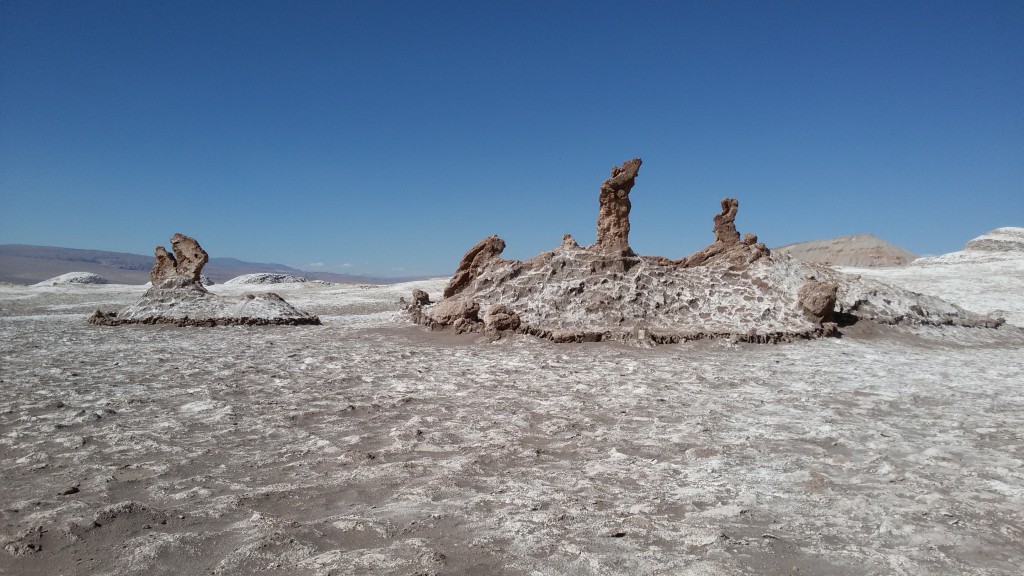 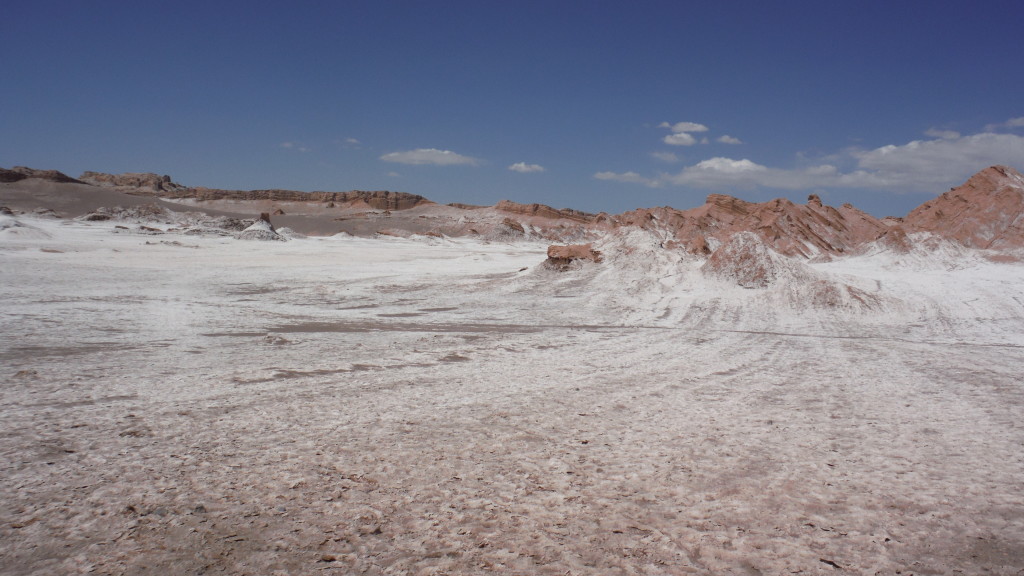 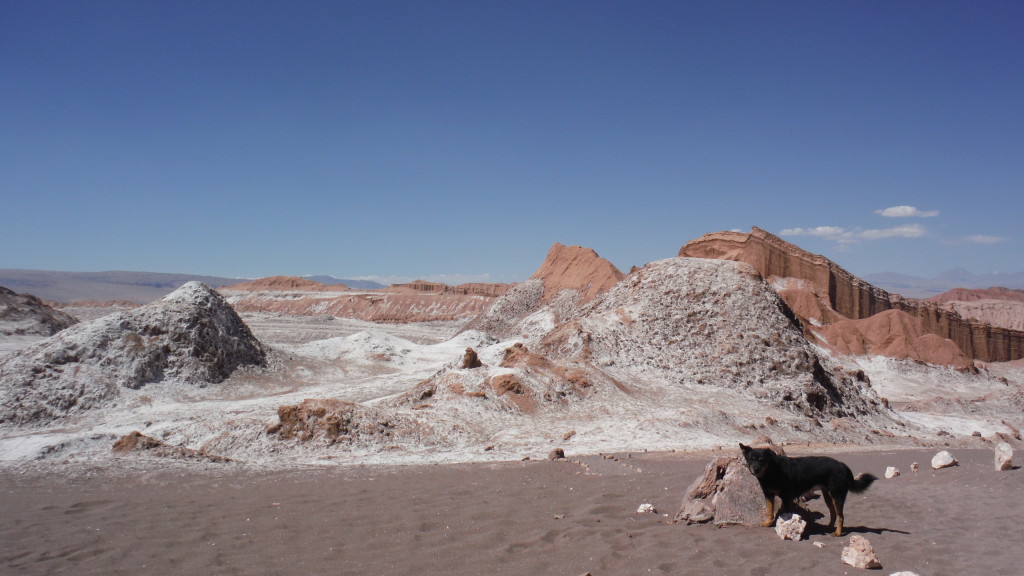 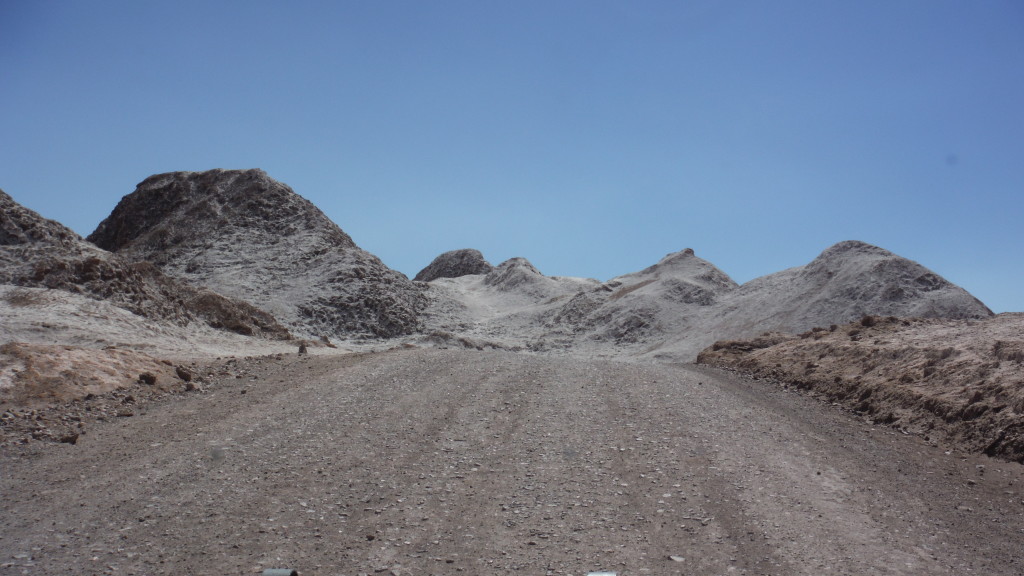 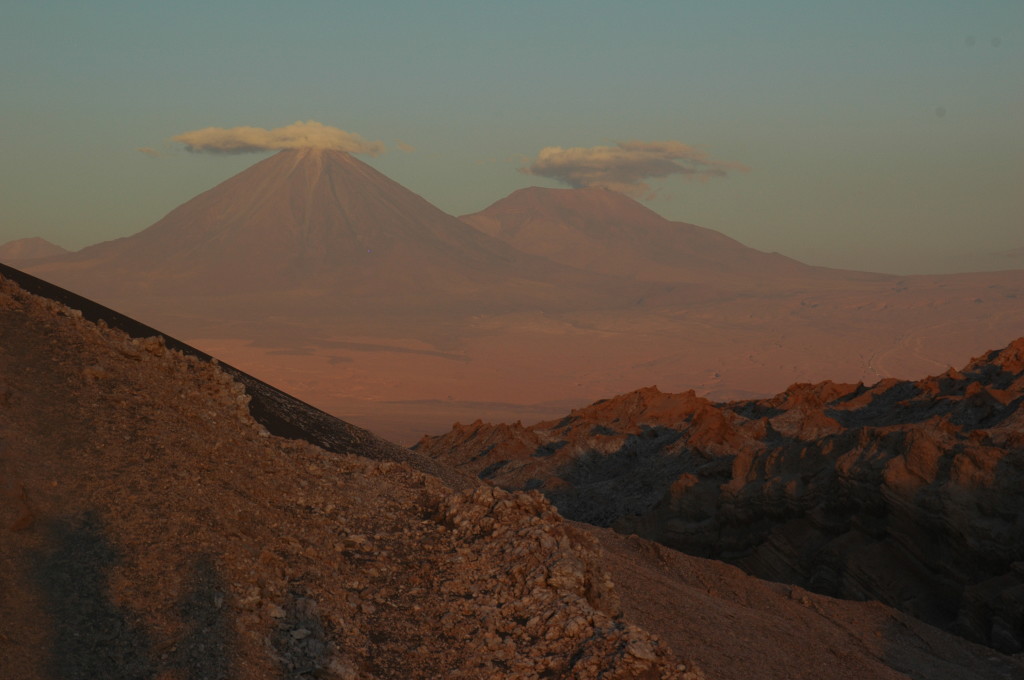 Like every 20th 0f the month, this morning, January 20th is very painful. Already 3 months have gone by since France left. How I would like it’d be three years, thirty years… I imagine the pain would be less.

I don’t have much to do today and stick around the hostal. In the evening, David and I talk about the various attractions in the area while we have a beer on the patio. We can’t seem to find the Spanish word for “monk” and I ask the girls at the table next to us for the traduction. They misunderstand me and give me the traduction for…”monkey”! A lively and very mixed up conversation follows. A mix of my French, David’s english and their Chilean Spanish. Entertaining, to say the least.

Soon, Paty comes to our table and becomes our official guide for a virtual visit of San Pedro’s attractions. Pretty simple, she’s seen them all and describes them to us with hand signs as well as numerous photos. Her friend Liu laughs and appreciate the spectacle from the other table.

Later, David decides to go get a bite to eat and I switch table. We chat a bit and have a few drinks, me of rum and them of beer. Of great company, the girls explain they’ve been here a week and are leaving tomorrow. They’ve seen pretty much all of San Pedro and tell me about it in a very interesting way.

The evening stretches until the wee hours of the morning and the day ends on an infinitely better note than it begun. But the girls don’t know anything about that. Thanks girls, for letting me forget today’s date for a while.

In the morning, we exchange emails and blog like I did 100 times before on the trip.

Adios and gracias Paty and Liu. Thank you.

In the next installment: Pushing south in Chile.